This page contains posts and pictures from Tours and Events completed so far this year. Additional details are available in the newsletters.

Tuesday, August 9th under the threat of sprinkles 20 members met at the End of the Commons store in Mesopotamia (click for website) on the corner of Rt 87 and Rt 534.  This store is an old-time store carrying many items that harken back to the days of our parents and our youth. One of the items I am most fond of is chocolate Necco wafers and I saw many purchase fry pies and buckwheat pancake flour.

After spending an hour or so meandering the store the drivers meeting was held and Ron gave some interesting details of the area we would be driving thru on Rt 87.  We set out with tops down for the 17-mile drive to our luncheon destination, the Peter Allen Inn (click for website).

Our reservations were for 12:30 and arriving a few minutes early we took the opportunity to observe the gorgeous grounds. This was an upscale dining experience with white table cloths and cloth napkins.  Food was served in a timely manner and it became quiet while everyone enjoyed their lunch.

Some of the members took the time after lunch to take a self-guided tour of this facility and all its finery. Those that joined us for this AWL were Leavens, Kuras, Terleskys, Simmelinks, Embrees, Nolands, Klerkos, Tony Oriti and Jackie Molina.  If you have an afternoon, take a ride and enjoy this establishment!

As we pulled into the industrial park, we were greeted by Jonathan Staggs, the Leroy Engineering staff and Mrs. Staggs, Lindsey Staggs and Lisa Staggs (Jonathan’s wife).  Did I say this was a family business?   Oh, I can’t forget Hazel and Daisy, the resident dogs.

The staff and the Miata members gathered in small groups for a tour of their facility.  Questions were asked and explanations were given on how some of the equipment worked.  Some of our members asked questions pertaining to maintaining their own Miatas.

Three people were treated to a ride in the Leroy Engineering race car (ask Lois Kerklo if it was fun). Three others were offered a ride in Jonathans’ personal Miata to experience how the modified suspension handles.

Eleven Miata members met in Aurora for the start of the Painted Ponies Tour. Greg & Judy led the group to Joe Leonard’s gallery near Garrettsville. Joe is a world-renowned carousel horse carver and we all admired his beautiful steeds on display as well as hundreds of assorted artworks.

Ten cars and 19 members departed from McDonald’s in Independence, OH and started through the Metropark for a leisurely drive enjoying the scenery and the coolness from the shade trees. We were all surprised when we saw Joe and Sandy in their Miata waving to us.  Joe and Sandy did all the work planning this tour but unfortunately had to relinquish the hosting of the tour to Bob and Jan.

We stopped at Punderson State Park for a restroom break and then headed on to the Corner Field Model Railroad Museum and Trading Post Train Shop. We lost a couple of cars at one turn, but everyone was back together before long. The train shop asked that we park in a row on the grass so that people could admire our cars, but we didn’t see too many admirers. The Gauge O train display is very fascinating. Many trains circle around a very large display that includes Ferris wheels, buildings of all sorts, traffic lights that work, a roundhouse, model cars, traffic signs, McDonalds restaurants, and even an alien spaceship. There are so many details to see each time you walk around the display. 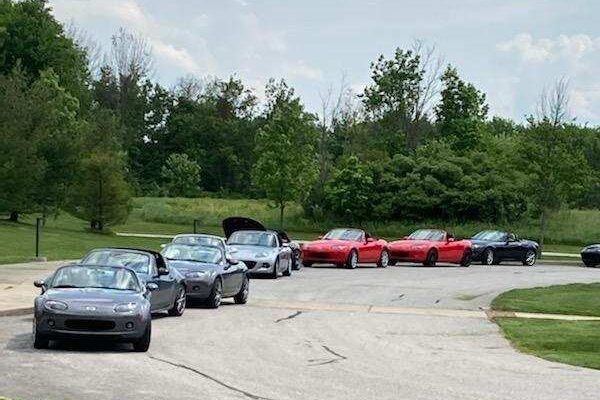 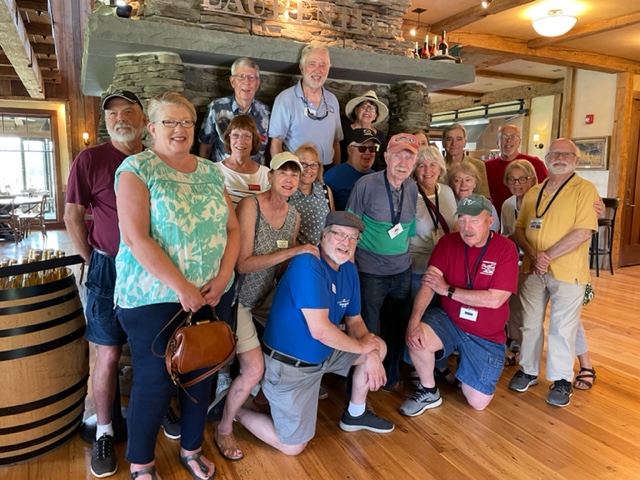 Tour Leaders:  Ed & Judy Kura
The weather was on our side for the Great Curves Drive on Thursday, July 20.  12 cars with 22 club members and 2 guests met at 9 AM in Canton for a revised version of a Good Curves Drive originally created by Bob Maurer.  After just a few modifications due to road construction, a shortened version of the drive was ready to launch.

Ed and Judy Kura split the lead driving, with Judy leading the first half and Ed taking us to lunch.  Lots of sunshine and no buggies or bicycles made for a fun and somewhat leisurely (most of the time) ride through some beautiful scenery on awesome roads in southeast Ohio.  The drive went on for about 125 miles with one rest break about halfway through.  Our tour concluded at Mr. Lee’s Restaurant in Cambridge for a delicious lunch, and yes, there was pie!

After the club drive and lunch, many convened at the Yellow Butterfly Winery in Newcomerstown for a refreshing beverage to top off the day.  Special thanks to Tony and Lisa Terlesky for sweeping!  A good time was had by all and it’s safe to say that everyone is looking forward to the next club drive!

After a tornado devastated Malabar Farm in June, we rescheduled the drive for July 17 th. That day, however, was soggy and chilly, but as usual, the Miatas braved the weather and everyone went tops up. We cruised back scenic roads, including the Old Lincoln Highway and Johnny Appleseed By-Way, arriving at Malabar a bit wet but all together.

After cookies and a quick look at the Visitor Center, we were hauled up to the Big House to begin the tour of Louis Bromfield’s home. Our guide told us many humorous stories of the family, their packs of boxer dogs and Hollywood visitors, as well as dozens of rooms in the house. After the tour the group was divided about doing the grounds tour. But the tour guide decided to ” kidnap ” the group and off she took them with the tractor and wagon.

When they returned, a little damp and cold, we drove a short distance to Malabar Inn. for a lovely lunch in the historic building. The Miatas headed home on rt 95 to Wooster and a stop at Hartzells for ice cream. Thanks to all those who joined us and thanks also to Daryl & Jane for being our sweeps for the day!

Despite the threat of rain in the forecasts all week & despite a wrong turn by the Fearless (but brain dead) Leader, all of our cars made it safely to Mid-Ohio for the Vintage Races. Once parked in the car corral most of us headed to the pits to get up close & personal with the race cars, then it was time to enjoy some of the faster, louder of the race cars and then finally, back to the cars in time for our parade laps. An accident during the last race before the lunch break closed the track and we only got to do a single, slow parade lap. Boooooo——hisssssss

But then we got back to watch the races & eat some lunch of our own. While we were enjoying our lunch & watching the races the Concours de-Elegance judges were finishing their judging & putting awards on the winning cars. Two of our club cars won awards, Glenn Moenich won 2nd place for Judges Choice, Contemporary Class (1981 & Newer) and Rich Velardo won third place for Judges Choice Best of Show.

They came, we saw & they left…but before that, we ate.  Lunch was at Thyme2 in Medina, the staff there did an outstanding job making all 25 of us happy diners.

Once lunch was over with, we wandered up to the Medina Square to watch approximately 120 pre-1974 rally cars park around the square for an hour’s break in their travels. Cars ranged from a pair of 1916 Hudson race cars, to just about anything that you can imagine. There were lots of Mustangs, Corvettes, old Fords (from the teens to early ‘70s Mustangs), old Chevys, trucks…how about a Graham Brothers truck from 1925…a 1955 Citroen Traction Avant. In short, was an amazing & eclectic collection and we were able to get up close & personal with the cars & drivers. Pictures can be found here;  https://flic.kr/s/aHBqjzVgWA

The morning drive found twelve Miatas facing fussy weather with threatening rain clouds. But tops were down the first half of the tour which covered miles of back, isolated roads. The group stopped on a high ridge for a photo shoot and then on to Charm for a rest stop.

This drive will now be known as the “Ascension Day Bombshell” Keim Lumber was closed, Charm was deserted, nothing Amish was open! Unknown to us, this was a major holiday for them. There we sat in an empty parking lot, but not empty bladders! Regrouped to Baltic restaurant and thankfully bathrooms. whew!

Curvey, sweepy  Rt. 731 brought us to Raven’s Glenn for lunch. The owner personally greeted us and thanked us for coming. A delicious lunch, prizes and much jawing followed. We departed north on c. h. 93, arriving at our ice cream stop on rt 30 and the conclusion of a super Miata event.

FYI – No matter how carefully you plan a drive, you never know how it is going to play out! Beware!!

The annual Zooming at the Gap had 11 Miatas with a total of 19 fun-loving participants; 13 from the Northcoast Miata Club, 4 from the Toledo Club, and 2 long-time participants who drove all the way from FL.  Each day had a drive of 200 + miles of scenic twisty roads around the Smoky Mountains National Park and included several trips through the Tail of the Dragon, some slowed by traffic, but all great fun.  Good fellowship and food were enjoyed by all despite a couple of last-minute changes due to COVID-related staffing issues at planned restaurants.  Also helping Bill Titley keep things organized were Linda Goosman and Steve and Pat Beam.

What an awesome day we had! The weather was in the 80’s and 41 cars filled with 80 members and guests met in Medina for the 26th annual FYBO tour. This was the warmest day in the history of the tours. It is an awesome sight to see all of the shiny cars with their tops down gathered in the parking lot. A driver’s meeting was held at 9:15 and at 9:30 the first group of 11 cars were on their way. Followed by 3 more groups. We traveled backcountry roads with scenic views, some Amish buggies, and endured spring smells from the farms all while enjoying a leisurely drive.
We arrived at the Der Dutchman restaurant in Walnut Creek for lunch. The tables were set up and ready for us.   As always, the service was excellent, and the food was good.
We were excited to have Todd and Dee’s charity sock drive be a part of the tour this year. Thank you for organizing this and to the tour members for their generous donations of 189 pairs of socks for the Veterans Outreach program.

Thank you to everyone for their help!
The group leaders; John & Donna, Mike & Lois, Dale & Cathy, and John & Jeanne.
Not to be forgotten, the sweeps who kept the groups together, Jim & Marilyn, Dan & Terri, Wayne & Marsha, and Dave & Karen.
Thank you to Dan Cali for helping members find a group to join when they arrived at the meeting area.
Those that took pictures and shared them on club sites, Thanks.
A huge Thank You to Mike & Lois, we could not have done it without your help.
What a great turnout! Thank you to all the members who joined us.

The Think Spring Party returned after a COVID-induced pause and was a great success with approximately 38 members attending on a very nice evening with no snowstorms to drive home in.  There was a great assortment of desserts and appetizers to feast on.  And of course, there were many great wines to sample and coffees to try.  The Party started at 6 pm and went well past 10 in the evening.  Everyone enjoyed the time to chat with all their friends after a long winter.  There were even a few Miatas in the driveway.

Thanks to everyone who attended in making this a great event.

CLUB MEMBERS MAY SELECT FROM THESE PAGES: